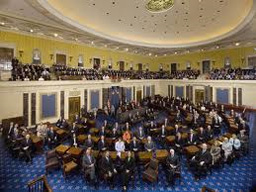 Many people toss around a lot of political terms, phrases and ideas, but use them in such a way that is often misleading or simply, completely, incorrect. The first step of educating yourself about our political system is to learn the terms they use and their real meanings.

I urge you all to take a stand and hold all politicians, news companies, and all other sources to the simple expectation of using words and phrases correctly. News correspondents in particular need to present the facts of all situations with as little bias and spin as possible.

Even if you think you know all these words I would suggest you read through them. I find it necessary to refresh my understanding once in awhile when the media gets to twisting them so far out of proportion. It is also a good idea to check back as we will be adding to this list.

*When multiple definitions were given, the most fitting and appropriate definition was used to define terms on this page. However, we at www.peoplepolitico.com urge you to look at all definitions as well as the thesaurus of these words and terms to gain a broader understand of them.