Presidential Candidates: We Are ALL Americans 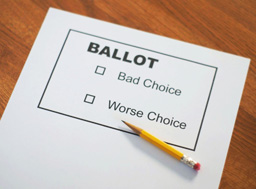 If you’ve been reading this blog, you know that the contributors share a disdain for the current political climate, especially the lack of respect that politicians, pundits, and others have shown in their conversations.

What is really disturbing is the lack of respect and outright mockery that some of the men and women vying for the Republican Presidential nomination have been directing toward voters.

This behavior is perplexing to me…why alienate so many people in the country? Don’t you need their votes?

Herman Cain said stupid people are ruining the country, and “the objective of the liberals is to destroy this country”. I’m pretty sure the 72 million people who are registered Democrats in this country would find this insulting.

Newt Gingrich enjoyed his brief surge in the polls with comments about the Democrats’ agenda, comments which were out of step with his prior reputation as a bipartisan. His actions were often contradictory during the Clinton administration. In 1994 he put together a helpful list of words to use with Republicans: “Moral”, “Family”, “Freedom”. And an accompanying list to use with Democrats: “Failure”, “Traitor”, and “Waste”. Gingrich himself is often held to blame for the extreme partisanship evidenced in politics today, after bringing ethics complaints against Speaker of the House Jim Wright.

However, in the late 90’s, he worked with President Bill Clinton on big projects, including welfare reform and working toward a balanced budget. As recently as 2008, he expressed his support for action on climate change, in an ad in which he appeared with Nancy Pelosi, who was Speaker of the House at the time. However, when asked about the ad in November of this year, he said it had been a mistake.

For some reason, it’s now gauche for politicians to be seen working together for the common good, so Mitt Romney called the ad an example of Newt Gingrich being “an unreliable conservative and an unreliable leader”. Gingrich didn’t attempt to defend the ad, which to me is unfortunate, because I view the ad as a shining example of how it IS possible for Democrats and Republicans to work together on an urgent topic. It is constantly perplexing to me that the environment is a Democratic issue. After all, the consensus in the scientific community is that global warming is occurring and that human action is contributory. We all live on the same planet, so it seems like a global issue to me.

By now Rick Perry has enough bizarre YouTube videos to hopefully put him out of the running as an actual contender for the Republican nomination. His debate gaffes occurred after his comments about doubting the science behind climate change. In November, he signed a pledge to uphold the legal definition of marriage between one man and one woman, and appoint “faithful constitutionalists” to the federal bench. Michele Bachmann also signed this pledge. In December, he released what has been dubbed his “anti-gay” ad. This kind of stance doesn’t sit well with 53% of Americans, who according to a new poll, think the government should give legal recognition to marriages between couples of the same sex. A candidate who vows to deny anyone’s basic rights is shocking to me, as is a candidate who will not consider a potential judge’s merits if that nominee doesn’t fit neatly into a pre-specified category.

I hesitate to consider Michele Bachmann an actual candidate for the Republican nomination, but since she has been involved in the debates and is as much a candidate as Rick Perry, I can definitely include her comments. She has said that Barack Obama and the “people he associates with” are Anti-American. Most of her other noteworthy comments are not specifically aimed at Democrats, but she is very good at alienating very large chunks of America. She has stated that she is for eliminating minimum wage, being a submissive wife, and introducing legislation to ban same-sex marriage. She is apparently against a vaccine against cancer (!) and all 11 million illegal aliens living in the United States.

Until recently, Mitt Romney seemed to be the only major Republican candidate whose aim wasn’t to alienate half his future constituents. Indeed, the main attacks from the right and left focus on how his comments on the issues tend to change. I’m not against a candidate changing his or her mind with a little more knowledge, but not being able to pin down the views of a possible future President make it difficult to decide if you want that person representing you. It’s nice of him not to call me anti-American, but I’m afraid his indecisiveness may be leading him down the road the way the other candidates came: He said recently he’d back a ban on same-sex marriage. In October he said the Supreme Court should reverse Roe v. Wade, a clear indication of his opposition to reproductive rights. However, he refused to sign the limiting pledge that Bachmann and Perry both signed.

Whomever the Republican nominee for President should turn out to be, I hope they understand the need for flexibility, bipartisanship, compromise, and that they will not only be governing the red states, but the entire United States of America.