Lead by the US, UN forces started a campaign to enforce a no fly zone in Libya dubbed Odyssey Dawn. Approximately 110 new and old Tomahawk missiles were fired into the Libyan night, targeting roughly 20 strategic locations to knock out the Libyan surface to air defense network.

Some of the countries involved in enforcing the UN resolution are; United States, Canada, United Kingdom, France, Spain, Qatar

Everyone hates to see it come to such violence and deadly actions. It is good to see that the UN is standing behind their promise and moving in institute a no-fly zone as requested by the Libyan people. Gadhafi’s military and supports have been violently attacking demonstrators in Libya, and the UN is helping to defend this country’s people against their own government.

It is amazing to me to see how democracy is spreading throughout the world recently. It is amazing how 21st century technologies are being used to spread the word of the people. Social media has proven to be a powerful force in uniting people toward a common cause. Too long have many people been suppressed, downtrodden, suffering terrible human rights violations. This new technology has been used in many unforeseen ways and empowered nations of people who for decades, had no voice.

Stand by the Libyan people and support their revolution into democracy. Don’t let the talking heads convince you that anyone, anywhere around the world does not have the right or is not ready. It is a fundamental right to have what a true democracy brings to its people. Everyone on the planet deserves to have a voice in the world around them, no matter their race, creed, economic status or politico faction.

There may be micro issues on why some would argue against a democratic country but the larger and most important thing is that all people deserve the most basic human rights. From there, we can begin to tackle the smaller or more focused issues of the world and how they affect us.

Why would anyone else ever deserve less then what we have? 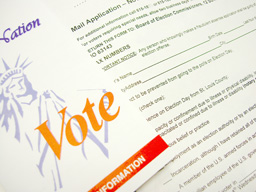 I don’t know about you, but seeing and hearing about the Domino Effect that has started through the Middle East, starting with Tunisia, is something amazing to behold. The power of technology is empowering those people. It has empowered many to make the world a better place for them and ultimately for everyone.

Most of us can agree that a free Democracy is the way for the populations of the world to find true prosperity. A free democracy gives all of its people the political power to forge the future for themselves. It is a powerful and empowering method of government in which I believe that all of the people of the world deserve.

So did many others, especially FOX news. Years ago they fought, and pushed, and said that democracy is something that everyone should have. That people all over the world have the right, as do we, to be free in a truly free democratic society. So now why is there a sudden backlash from the Right Wing headed by FOX news to downplay the amazing uprisings taking place in these areas? It seems their hypocrisy knows no bounds.

Secret History of the Iraq War

We literally invaded a country without being provoked on the grounds of “defense” and later justified our misled invasion as spreading democracy throughout the world. When anyone questioned the actions or the motives of the Bush Administration and the Iraq War, they were attacked as traitors, unpatriotic and weak. Now there are countries that are trying to bring democracy into their own countries and they balk, sidestep and even question these other countries on their worthiness or ability to handle a free democracy. It’s absolutely crazy.

Are the American people’s memories so short that they cannot remember only a few short years ago? It’s not like we’re relying on history books or drawings on a cave wall. We KNOW what happened. We all lived through it. So why then is there such discourse in such a simple fact, that we were all supposed to agree on, that everyone, EVERYONE deserves a free democracy. In a free democracy the people have the power to make their country into what they want, what works best for them and will give everyone a say in how things are done.

Denial and Deception: A Study of the Bush Administration's Rhetorical Case for Invading Iraq

I know, they talk about oil prices going up. They talk about trade changing and uncertainty. There is uncertainty because we have supported the regimes there for years. We’ve ignored the boot on the peoples’ backs as long as we can get cheap oil. Enough already. It’s time to stop greed from ruling our every decision. This newest argument, the one asking if they can “handle” democracy needs to stop. We need to support all people that are fighting and dying for human rights.

It’s also time to realize that whether we lose the oil today or in 50 years we will most certainly, and assuredly lose the oil. This is why we must act now to improve our own energy policies and move toward renewables. We must start to wean ourselves off oil. We must stop oil and gas subsidies and transfer these to renewable energies. The oil and gas companies really don’t need subsidies. They make billions of dollars in profit every month, and are so greedy they apparently can’t spend a small portion of that on decent blowout preventers on their oil rigs in the Gulf of Mexico.

Power of the Vote: Electing Presidents, Overthrowing Dictators, and Promoting Democracy Around the World

So please take a step back and look at the big picture. We, as the flagship of freedom and democracy set the precedent and hold ourselves to the highest standard of these ideals. We must also support and foster these democratic ideals worldwide.