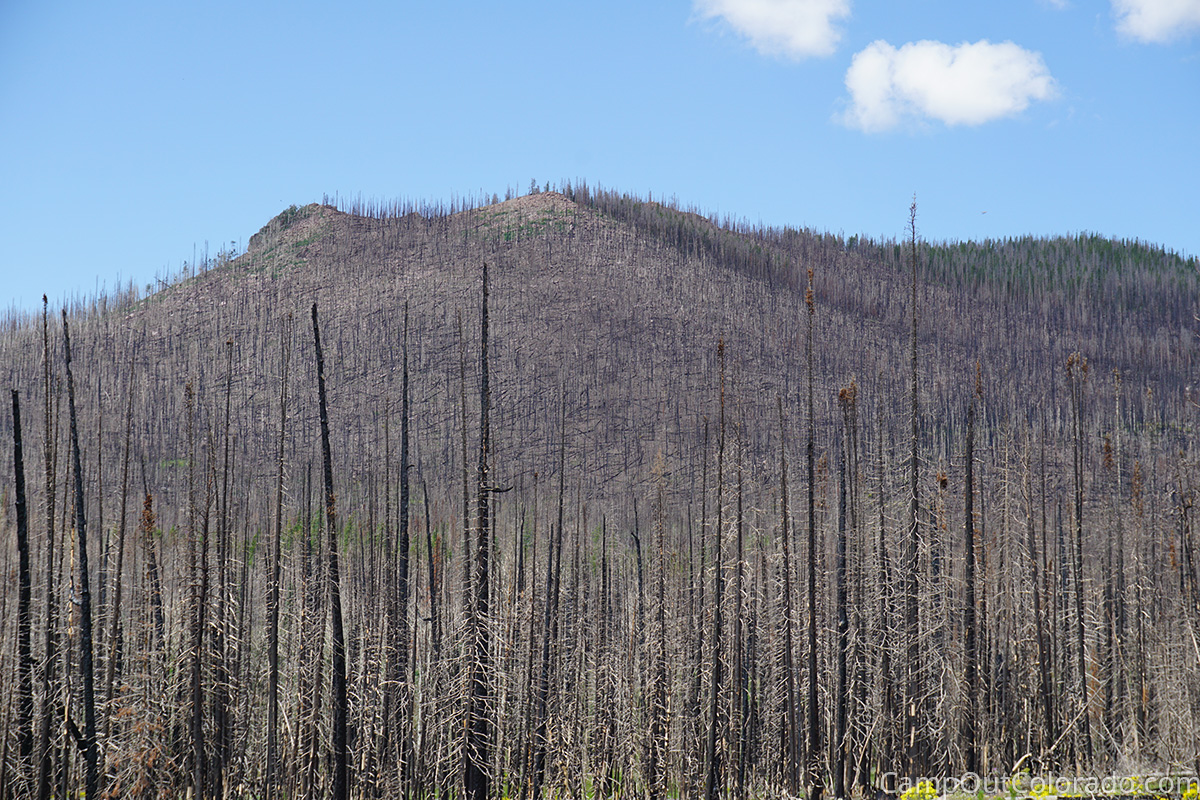 My family and I went camping this summer in an area full of beetle-killed trees. Many of these beetle-kill areas were also burned by wildfires, because dead trees provide excellent fuel for an errant spark or lightning strike. The forest used to be beautiful—thick and green. Now, it was clear that in the forest, only the campground area had been saved from the insects and the fire. The only reason we were able to camp amongst green trees was because the campground trees are sprayed with insecticide and firefighters worked to save the campground. Colorado could not afford to lose this tiny bit of forest that brings in revenue from camping reservations. This green oasis exists because people don’t want to camp amongst burned tree corpses. Once the trees are lost, it takes YEARS for new trees to take their place. And even with this human intervention, all through the campground were signs of beetle-killed trees that had been cut down in order to try to save the adjacent trees. This level of intervention is not possible for the thousands of square miles of national parks, state parks, and forests in Colorado alone.

The people in charge of protecting our parks have begun removing protections that have stood for many years, and allowing drilling for the very fossil fuels that have caused the forests’ demise.

I sat on the shore of the lake, with the healthy pines at my back. The pines provide home and cover for birds, chipmunks, caterpillars, longhorn beetles, deer, and many other species. On the other side of the lake was a hillside covered in the unrelenting light brown of dead trees. No birds called from that side. No deer stepped down to drink from the lake, since there was no tree cover for them. The ecosystem had fallen apart. The National Park Service has worked for over one hundred years to preserve the ecology of its parks. This work is being undone by the very government that is tasked with the parks’ protection. By that argument, this country’s citizens are seeing their own health and well-being undone by the government in exacerbating and accelerating climate change.

Humans are Breaking the Environment

Those who argue that wildfires are natural need to know that the conditions that have led to extensive beetle kill are due to climate change. Bark beetles have lived here for thousands of years. The area’s cold winters have traditionally kept the beetle’s population in check by killing some eggs and larvae. But higher temperatures fail to keep the population in check and low precipitation weakens the trees’ response to the invaders (trees can expel invaders or their eggs with sap flow). The last ten years has seen a massive infestation and the resulting devastation of our forests. https://www.nps.gov/romo/learn/nature/mtn_pine_beetle_background.htm

We Must Stop Enabling Climate Change

I find the idea of opening up previously protected lands to obtain fossil fuels repugnant. In essence, taxpayers pay subsidies to oil companies.  https://www.nytimes.com/2016/08/06/upshot/do-oil-companies-really-need-4-billion-per-year-of-taxpayers-money.html. The oil companies then sell fossil fuels back to us to do our part to irretrievably change our environment—increasing the number and severity of natural disasters and continue in our complacency of this reckless global experiment in greed and apathy.

I know that it is too late to reverse these effects on our environment. I know that these dead trees are the least of our worries. But why are our elected government officials NOT looking out for our national wonders AND their constituents’ health and well-being? Climate change and the weather changes it’s bringing are affecting us all—killing or displacing many of us.

It’s time to elect officials who understand the effects of climate change and will not serve the corporations who have the most to gain short term, but instead help protect the health and well-being of the voters they represent. It’s time to divorce money from politics so representatives can do the right thing. When you vote in the upcoming election, please take into consideration who the candidates are beholden to and which candidates take climate change seriously. Our lives and our beautiful world depend on candidates willing to say no to dirty money.